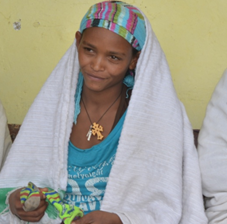 Thanks to the mother to mother discussions!, Tazeb wants to continue her education despite early marriage

Tazeb is a 19-year-old woman attending the mother to mother discussions organized by Hiwot Ethiopia in Doa Kombulcha. She already has one child and was married at age 17, a result of an arranged marriage by her family. She dropped out of school at grade 6. She started attending the discussions 3 months ago and has been learning about family planning, sexual and reproductive health, home economics and harmful traditional practices. When asked what topic has been most interesting for her, she instantly responded that early marriage has been the most interesting for her. She realized that she had made a mistaken getting married so early and regrets dropping out of school. As a result of the discussions, she is eager to start her education again and space out her next birth to make this possible.